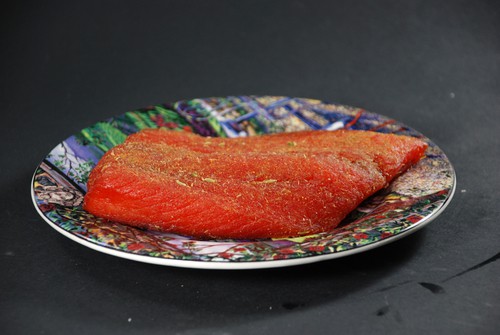 Gravlax at a Glance

Gravlax is a charcuterie product that comes from Northern Europe and the North Atlantic. This preserved food is characteristic of Nordic countries, mainly Sweden, Norway, Denmark, Iceland and Finland.

Made in the middle ages by fishermen, this is produced from salmon. The name gravlax comes from the Scandinavian words "grav" which means grave and "lax" or "laks" which means salmon. The term literally translates to buried salmon which was the process used to preserve the fish.

To make modern day gravlax, an entire salmon is skinned and filleted. This is then rubbed down with a mixture of salt and sugar then left to cure with some dill weed. The fish is often weighed down to help with the curing process.

Traditional preparations of this also involve curing the fish. However instead of being weighed down, these are buried in the ground or put into barrels with bark from a birch tree. The result is fermented gravlax with a strong distinct odor and a tangy flavor. By the 18th century preparations no longer included fermenting, which was replaced by salting and weighing down of the fish.

The methods of preparation make way for bright orange, translucent fish meat with thin white stripes. Its favor is salty balanced out by the sugar and complimented by a buttery taste that comes from the natural salmon fat. Other versions of gravlax, known as Lox include smoking during processing. Lox may have a similar taste with added smokiness. However, it should be noted that the two are not the same although some freely use the terms in exchange. Gravlax is simply cured without being smoked.

Like many other charcuterie products this is sliced thinly and eaten raw garnished with lemon slices and dill. It may be enjoyed with bread, potatoes and crackers along with a variety of spreads. Traditionally, it is served with a mustard and dill sauce known as gravlaxsås. A sauce may also be made out of the brine from which the salmon is cured. Other than the traditional ways that gravlax is served, it may also be used to make canapés and open faced sandwiches. Some of the things gravlax pairs well with are eggs, shrimp, herbs, sour cream and onions.