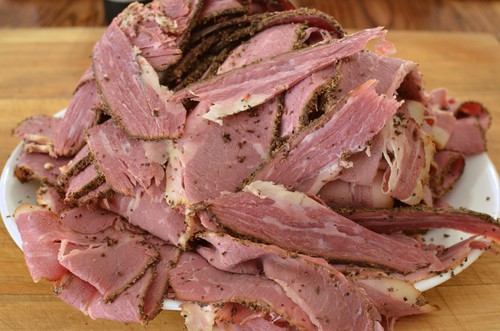 Pastrami at a Glance

A popular deli meat, the origins of pastrami can be dated back to the Ottoman Empire between 1299 and 1923. It was during this reign that the first pastrami made out of pork and seasoned with herbs was made. During the reign of the empire it moved from Turkey towards Europe and the Middle East.

Jewish consumers substituted beef in place of pork to make the delicatessen kosher. This new version soon became popular among the large Jewish populations in Armenia and Romania becoming a signature Jewish cuisine in these regions.

The name pastrami is taken from the Romanian word pastrama, which is also of Turkish origin. Like other kinds of processed meats, pastrami was made as a way to preserve animal protein during earlier times.

It is made by curing beef using either a dry cure or brine similar to what is used for corned beef, although, traditional Romanian versions also use mutton and pork. Newer versions use various types of meat or substitutes such as the vegetarian version known as seitan pastrami.

Once the curing period is done, the meat is partially dried then seasoned with spices such as crushed black pepper, coriander, cloves, garlic and basil. Some preparations may include boiling the cured meat before drying to remove excess salt. The dried and seasoned meat is then smoked to give additional flavor to it.

Since the initial steps of making pastrami involve curing the meat like corned beef, this gives it the same red color on the inside. The outside has a darker, brownish color studded with dark specks due to the spices used to cover it. Common pastrami made from beef carries the flavor of the meat mixed with some fat. It also has a fairly strong peppery taste from the spices as well as a bit of smokiness to it.

This deli meat is often served as a cold cut for sandwiches and is used without a need for further cooking. The Reuben sandwich is one of the more popular sandwiches that use pastrami. This delicatessen meat may also be served with side dishes such as potato salad or coleslaw.

Photo Credit: jeffreyw
Like What You've Read?
If so, please join the more than 19,000 people who receive my exclusive newsletter and get a FREE COPY of my printable modernist ingredient cheatsheet.
Just click on the green button below!