I'm a huge fan of Michael Ruhlman and an even bigger fan of pastrami so when he recently posted about making short rib pastrami it inspired me to follow suit. Of course, I had to make sous vide pastrami instead of braising it.

Considering how few people make their own, the process of making pastrami is surprisingly simple. You start off by making a brine with peppercorn, coriander, and pink curing salt, as well as any other seasonings you wish. 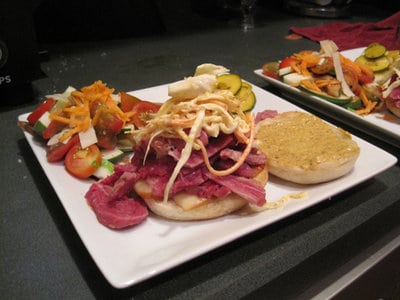 Then you put the meat in the brine and refrigerate for 2 to 3 days. Traditionally pastrami is made using brisket but you can really use any cut you like, and here we're going to use short ribs. Short ribs are normally more flavorful and fatty (which is good) than brisket.

Once the meat is done brining you remove it from the brine and pat it dry. For a true pastrami you would then smoke the meat for several hours. Though you can cheat by quickly grilling it on either side to make a crust. Or you can REALLY cheat and add liquid smoke to the sous vide pouch in the next step.

One thing to keep in mind is that the meat should already be very salty so you shouldn't add any additional salt to the pouch. Another thing to keep in mind, as brought up by @CKFriedhoff is not to put any of the brine in the sous vide pouch or it can come out too salty.

Once the sous vide pastrami is done cooking simply remove it from the pouches, slice and serve. You can use it however you normally like pastrami, I continued to follow Ruhlman's article and ate it on a toasted English muffin but I topped it with a mustard vinegar coleslaw, smoked Gouda cheese, and mustard. I also served it with a light tomato, carrot, and cucumber salad to help cut the richness of the pastrami.

For breakfast the next day I mixed my leftovers with some diced potatoes, garlic, and poblano peppers in a pastrami hash topped with egg. The perfect leftovers breakfast!

If you would like more information about the modernist techniques, ingredients, and equipment used in the Sous Vide Pastrami with Short Ribs you can check out the following.

Enjoying sous vide cooking? My free Sous Vide Quick Start course will help you get the most out of sous vide. You can start consistently creating amazing food with sous vide today!

Enjoying sous vide cooking? My sous vide ruler will help you determine how long to cook various pieces of meat. It's free if you sign up for my newsletter and will make your cooking go much more smoothly!

For the Sous Vide Pastrami

At least 4 to 4.5 days before serving

To make the brine combine all the ingredients into a pot and bring to a boil. Reduce to a simmer for 5 minutes then remove from the heat and cool.

For more information on the cooking times you can read my detailed article which addresses why is there a range in sous vide cooking times.

For Smoking the Sous Vide Pastrami

Take your short rib pastrami out of the brine and smoke them. There are 3 normal methods for adding smoke to the pastrami.

Once you have added the smoke to your short rib meat pre-heat your sous vide water bath to 137°F (57°C).

Vacuum seal the short rib pastrami in a sous vide pouch and place the pouch into your water bath. Let it cook for around 36 to 48 hours.

For Finishing the Sous Vide Pastrami with Short Ribs

Top with the pastrami and coleslaw and enjoy!

Healthy Sous Vide is the latest cookbook from Jason Logsdon, the best selling author of 10 sous vide and modernist cookbooks, and it shares many of his favorite recipes developed over the years so you can eat nutritious, flavor-packed meals that taste amazing. If you are a looking for a way to boost the flavor of your healthy meals, this book will help you create amazing food that your friends and family will love!

Get Your Copy Today!
Like this?
Have questions or comments about it?
Let me know in the article comments below or on Facebook!
Help me improve my content, let me know what you thought of this recipe! Just click on a star below to rate it.
Average Recipe Rating (click star to rate)
Thanks, your rating has been saved! Please let me know any additional thoughts in the comments!