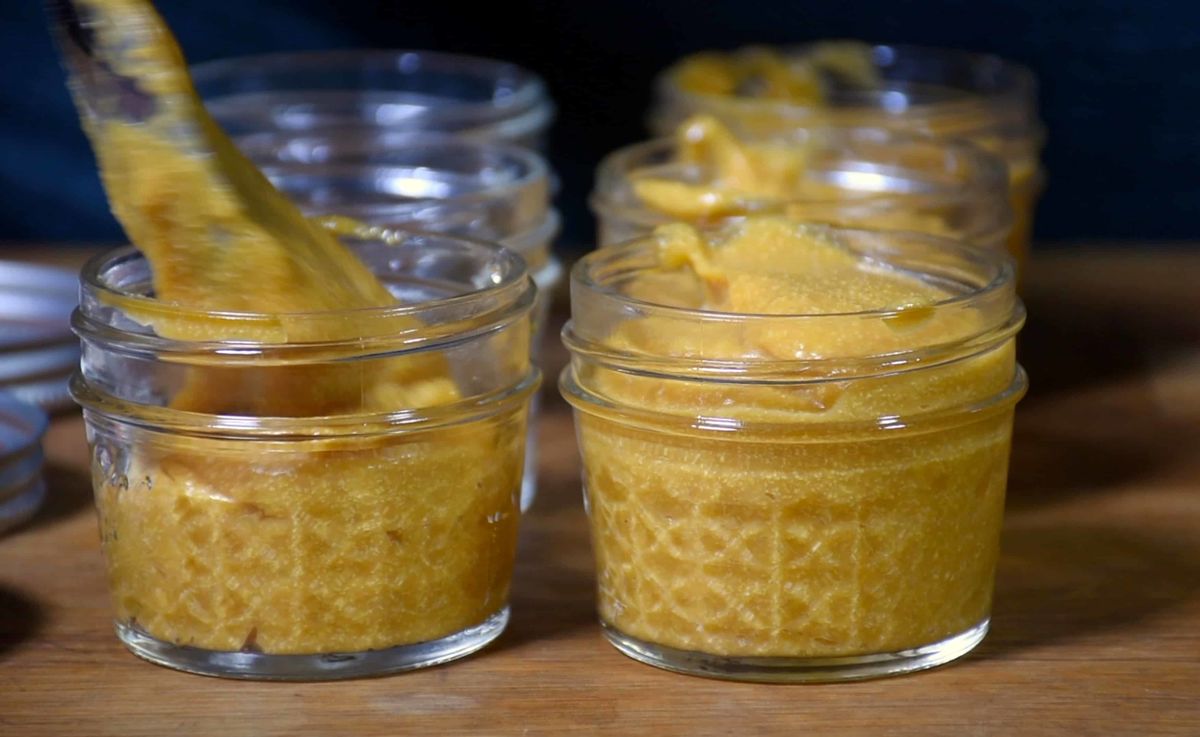 This recipe is part of the collaboration between The ISVA and Amazing Food Made Easy. You can check out all the great content both sites have to offer.

From the ISVA Editors

The perfect holiday dessert, this sous vide eggnog cheesecake combines everyone's favorite holiday beverage with a rich and decadent cheesecake. Toss it together with a graham cracker streusel and you have the makings of a new holiday tradition!

Want more like this? Our comprehensive book Champions of Sous Vide is a great collection of more than 70 sous vide recipes from two dozen top sous vide cooks.

For the Pumpkin Eggnog Cheesecake

Using a large mixing bowl (I use a Kitchenaid Mixer with the paddle attachment), mix the cream cheese and pumpkin until smooth. Toss in the sugar and mix until combined. Keep scraping down the sides of the bowl.

In a small mixing bowl, add the eggs, vanilla extract, rum, and pumpkin spice and beat with a whisk or fork.

After mixing the cream cheese thoroughly, add the eggnog. Don't forget to scrape down the sides of the bowl. Add the egg mixture above and do the same. Sift the cornstarch and add to mixer on low speed 1 tsp at a time.

Option: An updated alternate way of mixing, which I find easier-  To the mixer, add the softened cream cheese and pumpkin puree. Mix until combined. Toss in egg nog, rum, and vanilla extract and mix again until combined. While the machine runs on low, add the beaten eggs slowly.

In a separate bowl, using a whisk, toss in cornstarch, sugar, and pumpkin spice. While the machine runs on low and using at tablespoon, start adding the dry ingredients. When all combined, switch out the paddle for the mixing attachment. Run the machine on medium to high until thoroughly combined. Don't forget to periodically scrape down the bowl.

Fill the jars leaving some room at the top for some streusel of some type and whipped cream. Tap the jars a few times to get rid of any air bubbles and to make sure they're nice and leveled at the top. Tighten the screw ring band on your mason jar to fingertip tight.

Before submerging, I suggest tempering the jars with the hottest tap water to prevent glass breakage. Yes, an extra step but necessary. I would go as far as to submerge in hot tap water. Not tempering may result in breakage. I've lost a few jars over the years, even with tempering.

At 60 minutes, the cheesecake will have a custard-like consistency and at 90 more like a traditional cheesecake. I like 75 minutes.

After the elapsed time, remove jars using Mason jar tongs and place them on a towel. Let cool for an hour or so and place in refrigerator overnight or for at least 8 hrs. Top with streusel and whipping cream.

I use a rack to elevate the jars off the bottom and one on top to keep submerged. Some will float, and some will not.

For the Graham Cracker Streusel

I used cinnamon graham crackers, but you can use whatever you want. One full cracker for every cheesecake jar makes an excellent ratio.

Toss the crackers in a food processor and grind them until they look like sand.

Add a bunch of butter and sugar to taste, along with pumpkin spice and process.

Want more like this? Our comprehensive book Champions of Sous Vide is a great collection of more than 70 sous vide recipes from two dozen top sous vide cooks.

Like this?
Have questions or comments about it?
Let me know in the article comments below or on Facebook!
Help me improve my content, let me know what you thought of this recipe! Just click on a star below to rate it.
Average Recipe Rating (click star to rate)
Thanks, your rating has been saved! Please let me know any additional thoughts in the comments!

Affiliate Disclaimer: Some links on this site might be affiliate links that if used to purchased products I might receive money. I like money but I will not endorse something I don't believe in. Please feel free to directly go to any products I link to and bypass the referral link if you feel uncomfortable with me receiving funds.
Like What You've Read?
If so, please join the more than 19,000 people who receive my exclusive newsletter and get a FREE COPY of my printable modernist ingredient cheatsheet.
Just click on the green button below!