How much Chopped or Diced is in a Ginger Root?

Many recipes will call for "1 tablespoon of chopped ginger" or "1 inch of ginger diced" but it is not always obvious to determine actually how much ginger in a .... In order to help make cooking easier we did some experiments to help tell you exactly how much ginger you need to buy.

Fresh ginger is used after removing the skin with a vegetable peeler. Then depending on the end result desired, the ginger can be diced with a knife, grated with a coarse cheese grater, or sliced thinly with a mandoline.

To answer How much ginger in a... we went to the grocery store to check out the fresh spices section. After surveying the selection we discovered that if you weigh 5 different 1 inch pieces of ginger, the weight varies depending on the diameter of the ginger selected. And in turn it can make an even more significant difference in the flavor of your food! Sometimes it is easier when shopping by weight; you tend to get the same amount every time. We decided to use a 2 ounce (56.7 grams) piece of ginger for our tests.

A 1 inch piece of raw ginger with a 1 inch diameter yields about 1.1 tablespoons chopped weighing .26 ounce. A piece measuring a little less than 4 inches, will weigh 1 ounce (28.3 grams) and measure about 1/4 cup when sliced. One whole cup of chopped ginger will weigh about 4 ounces. And for cooking large quantities, 1 pound of fresh sliced ginger will yield about 3 cups.

Did you know that ginger is a knobby fibrous root with smooth light brown skin and white flesh inside that grows in tropical countries. It can be used fresh, sliced, chopped or grated, or it can be dried and ground. Both fresh and dried ginger will have a sweet hot flavor; but fresh also exhibits bright citrus notes. A whole root of ginger, with several pieces attached together is called "the hand." The little pieces that make it up are called "the fingers." And finally, Queen Elizabeth I is credited with the idea of gingerbread man cookies. She had hard ginger cookies decorated with gold leaf and icing to resemble the dignitaries visiting her court. 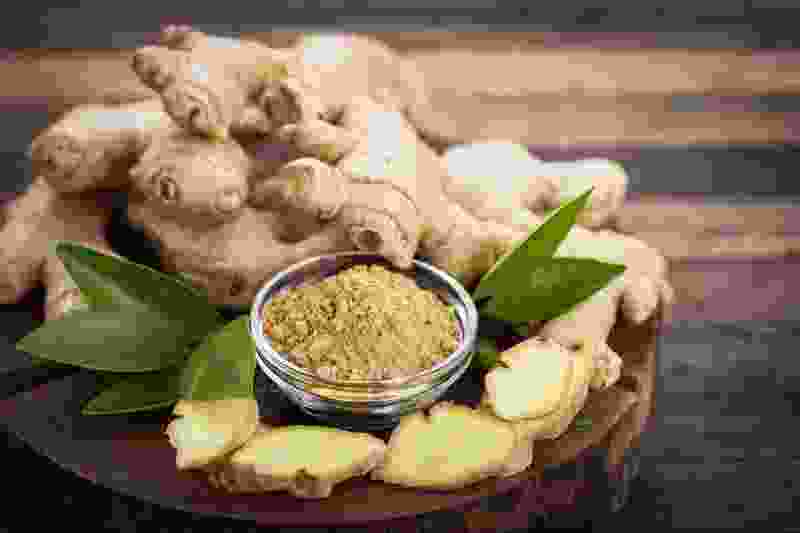 Next time your recipe calls for a cup of grated, sliced or chopped ginger you'll know how much to purchase at the store. You can also use our conversion tool below for any custom how much ginger in a..." measurements you need. If you use a lot of ginger in your cooking and baking you should look into getting a good vegetable peeler to greatly speed up the preparation process. I feel confident recommending the OXO Good Grips Swivel Peeler since I use it all the time at home! If you have never used one, a mandoline is a great kitchen tool that makes cutting vegetables easier. I recommend the Mandoline Slicer with stainless steel blades for making quick work of prep time. Both of these handy kitchen gadgets are slick to use and inexpensive!

Ginger is a plant with green leaves and blooms clusters of yellow flowers. The ginger spice that it is most known for comes from the underground portion or root.

Fresh ginger root is commonly found in Indian, Asian and Caribbean cooking, where the ground ginger root is more popular in western baking and drinks. 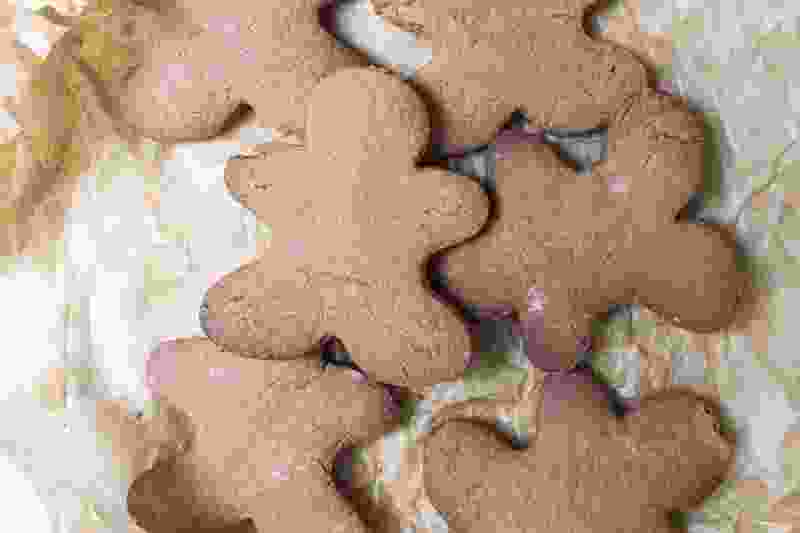 Is Ginger a Fruit or Vegetable?

Technically, ginger is classified as a vegetable because it comes from the root of the plant. However, it is significantly different than most vegetables. You definitely don't want to eat a whole bunch of it like you would carrots or potatoes. Instead, ginger is used like a spice in cooking. A little bit of ginger goes a long way. 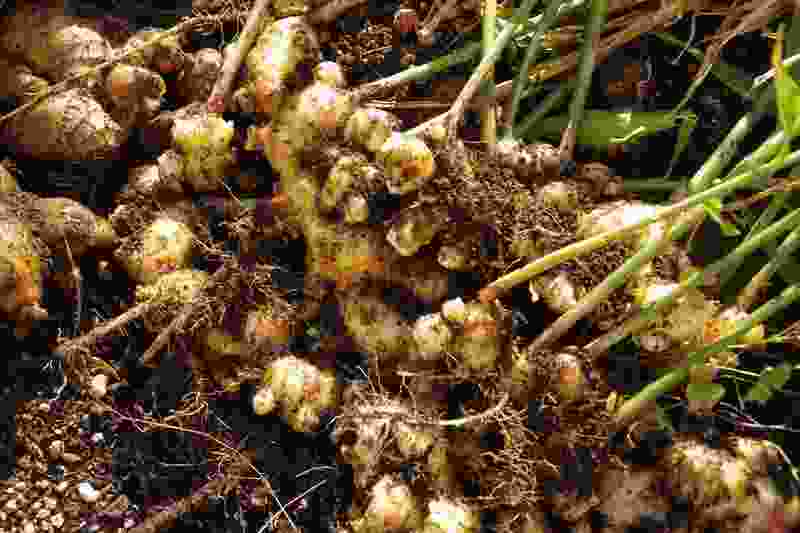 What Are the Types of Ginger?

Yellow ginger, also called Chinese ginger or Indian ginger, is the king you typically find in the regular grocery store. The ginger sold in a grocery store is usually grown longer so the spicy taste is stronger. For a sweeter spicy taste, a younger ginger root would be better. You can find these smaller ones in your local Asian grocery market.

The Japanese ginger has a more intense aromatic smell but normally produces a smaller root. Another one that is similar in flavor and scent, but smaller in stature is Thai ginger, which is also known as galangal.

Two other types of small ginger root that pack a big flavor punch are a Kintoki and a Sunti. If you have trouble finding these in your local market, you can definitely order them online from several reliable companies.

Depending on the type and age of the ginger you are using, its peppery flavor may be more or less pronounced. Some of the milder gingers have a sweet undertone. When cooking with ginger the zingy flavor and aromatic fragrance will be elevate in any dish! Regardless of the type of ginger, when fresh root is cooked, the zippiness mellows out some.

Ground ginger in a jar looks just like all the other ground spices you find in the baking isle in the store. Ground ginger has a stronger concentrated flavor with less kick than fresh ginger root. 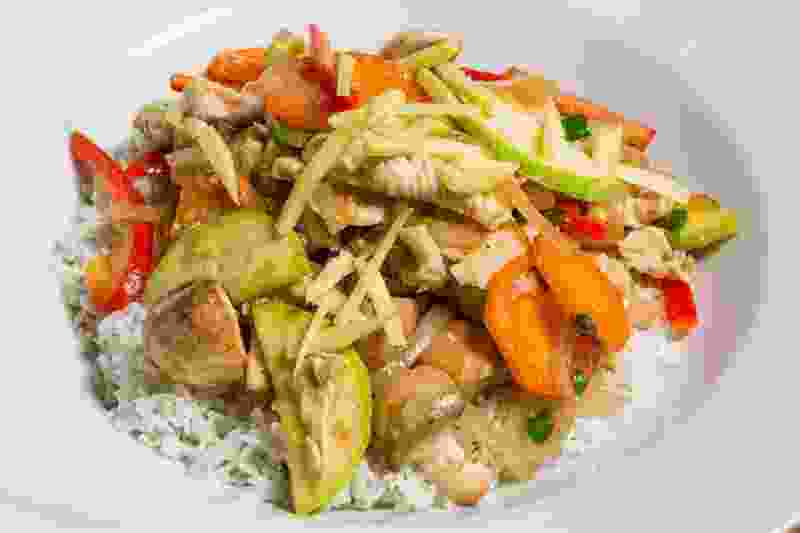 What are Good Substitutes for Ginger?

If necessary, you can replace fresh ginger root with minced ginger. It is sold in a jar both online and in most grocery stores. It is best to follow the replacement directions on the minced ginger label. Another option would be a bottle of ground ginger which is sold in the grocery store in the baking/spice isle. In this case you could substitute 1 teaspoon of fresh grated ginger with 1/4 teaspoon of ground ginger. 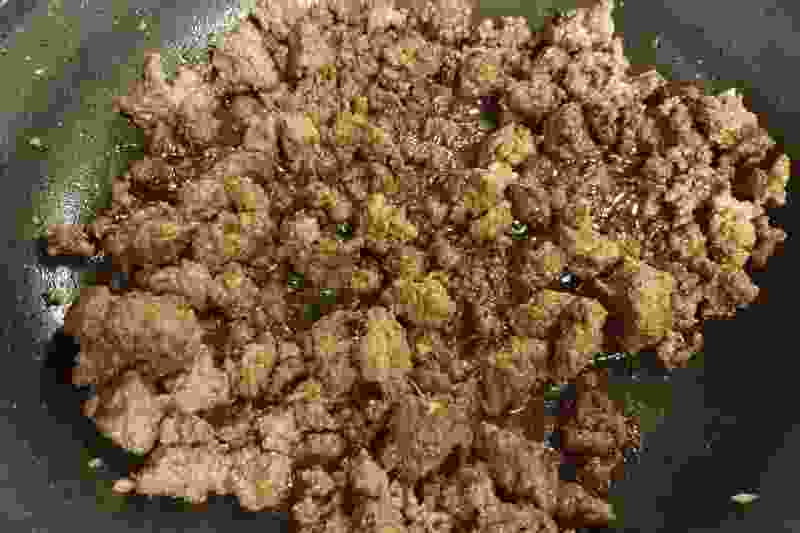 How to Cut Ginger

The first step to cutting ginger is normally to peel the skin from the section of the root you plan to use. You can either use the side of a spoon, a vegetable peeler or a chef's knife, which ever you find easiest.

Now you can use a sharp chef's knife to cut the ginger any way you like, including slice, julienne, or dice. It even works well to grate or zest ginger root.

You can stack your sliced disks on a cutting board and cut lengthwise again, now you have a stack of matchsticks.

If you want to create cubes or diced pieces, turn your stack of ginger matchsticks 90-degrees, make cuts across the planks with your chef's knife if. For mincing ginger, make all of your disk cuts thinner. 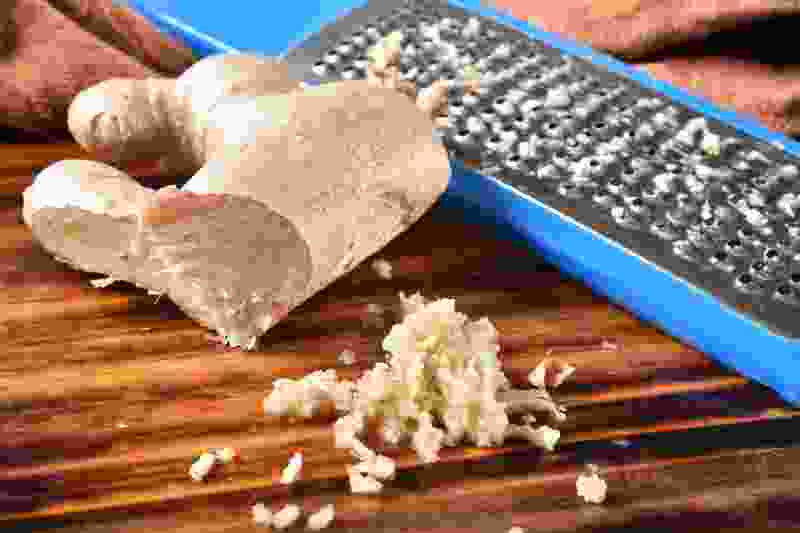 Can I Eat the Skin of Ginger or Should I Peel It First?

If you are using either Japanese ginger or young ginger which are readily found in your local Asian grocery stores, you would not need to remove the skin before eating.

Most types of ginger and older ginger roots have a little bit thicker skin which is normally peeled before using. Many folks recommend using the side edge of a spoon and scrap along the root. Since the skin is soft, it seems to strip off quite easily. Also, with all the nooks and crannies of the knobby root, the spoon glides in and out of the crevices easier than a chef's knife or vegetable peeler would. However, all of these techniques will do the trick. 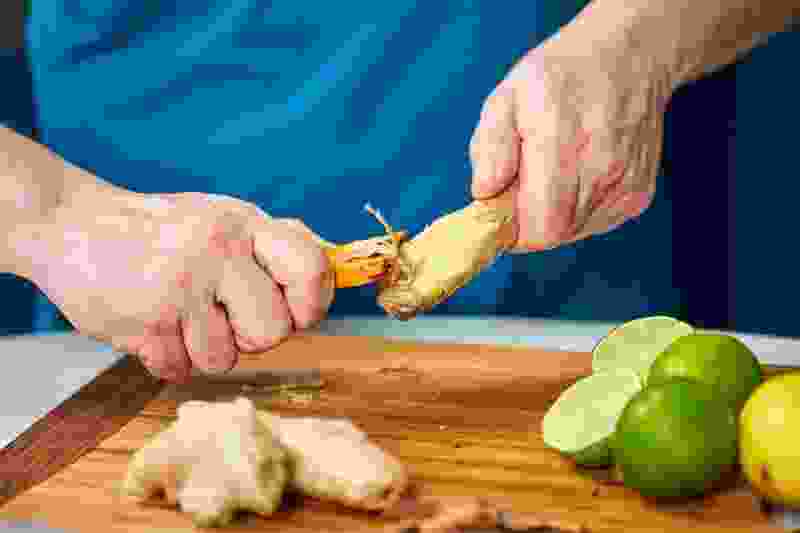 How to Make Ginger Juice

Ginger can be added to other veggies and juiced to make a refreshing healthy-type drink.

However, you wouldn't want to drink a glass of ginger juice by itself, it is strong and often biting. Ginger is used as a spice in cooking to enhance flavors and brighten up dishes.

You can even purchase a bottle of ginger juice in the spice isle at the grocery store or order it online. A small amount of the juice will do the trick! 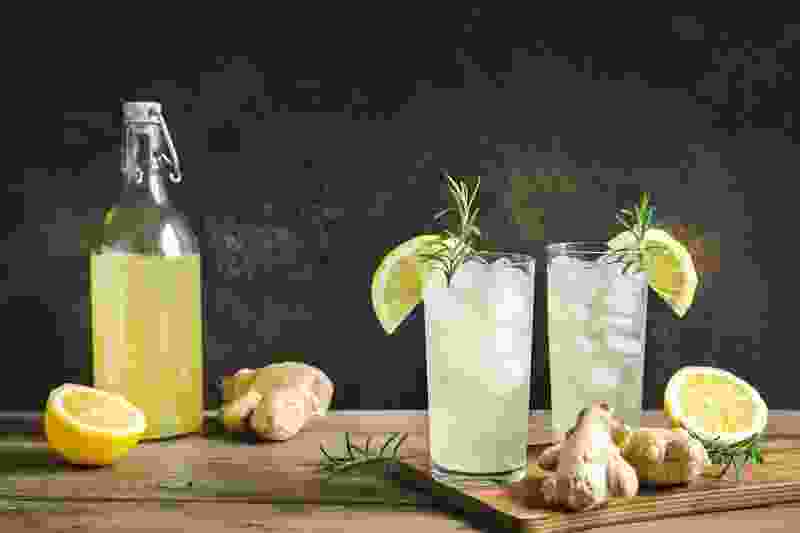 How to Store Ginger

Fresh ginger can be stored in a dark, cool, and well-ventilated place for up to one month.

If you refrigerate your ginger root, seal it in a plastic bag and place it in the crisper drawer. This will help it stay fresh for 3 or 4 weeks.

Once the ginger has been peeled, store Peeled ginger root may be stored in a lidded glass jar with enough vodka or sherry wine to cover it completely

To freeze fresh ginger, lay it on a baking sheet so it is not touching anything else. Once frozen, place it in a freezer grade Ziploc bag and put it in the freezer. This works great since you do not need to thaw out the ginger before using it. Merely slice it with a chef's knife or use a grater on it while it's still frozen. Throw the remaining frozen ginger that's still left back into the bag and the freezer. Frozen ginger will still maintain its zippy spicy flavor and fresh taste for 4 to 5 months.

A bottle of ground, crystallized, or dried ginger can be stored in an airtight jar and placed in a cool, dark closet.

Pickled and preserved gingers bought at the grocery store or online should be kept in their original containers and stored in the refrigerator after opening. 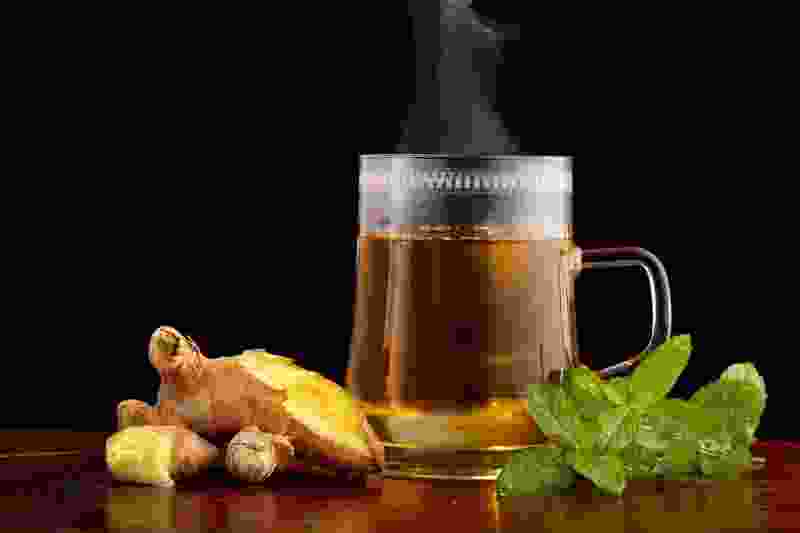 
How to Store Ginger Root