How Much Spinach is in a Pound?

Many recipes will call for "1 cup of cooked spinach" or "1 pound of fresh spinach" but it is not always easy to figure out actually how much spinach is in a cup. In order to help make cooking easier we did some experiments to help tell you exactly how much spinach you need to buy.

To answer How much fresh spinach is needed to make a cup of cooked we went to the store to check out the vegetable section. After surveying the produce we confirmed that the yield for spinach depends on the type used. We selected 1 pound of a typical supermarket flat or smooth leaf spinach for our testing sample.

Did you know that there are three main varieties of spinach: Flat leaf is the most popular with its smooth leaves. Savoy and Semi-Savoy, the other two types, are wrinkly and more intense in flavor. Spinach is a native plant of Persia (modern day Iran) but today China is the world's largest spinach producer at 85% market share. And finally, in the 1930's U.S. spinach growers credited Popeye the Sailorman with a 33% increase in domestic sales - a welcome economic boost for the spinach industry during the depression era. 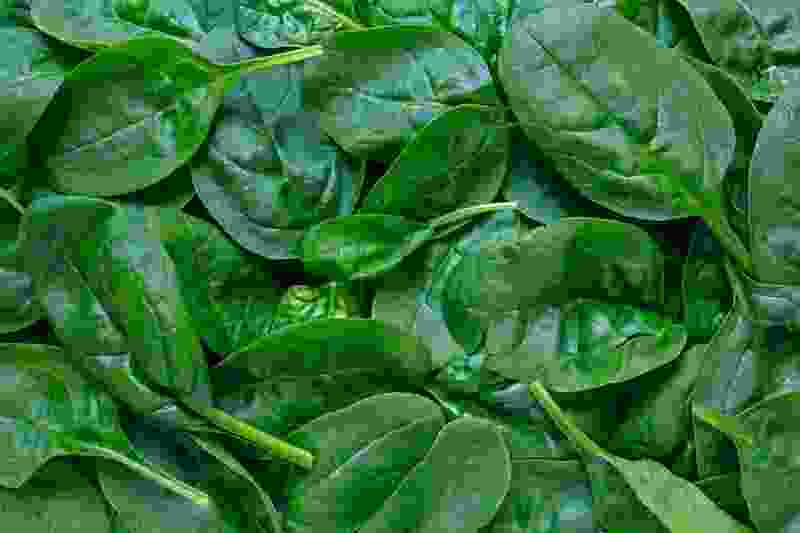 Next time your recipe calls for a 1 cup of cooked spinach or 1 pound of fresh spinach you'll feel confident knowing what you need. You can also use our conversion tool below for any custom how much spinach in a... measurements you need.

Custom Conversions for Pound of Spinach

One Pound of Spinach Equals

You need 1 Pounds of Spinach

Spinach leaves are eaten raw in salads, cooked as healthy side dishes, or incorporated into soups and stews. Many folks enjoy drinking spinach juice by itself or more often, including it with other foods to make smoothies and shakes. 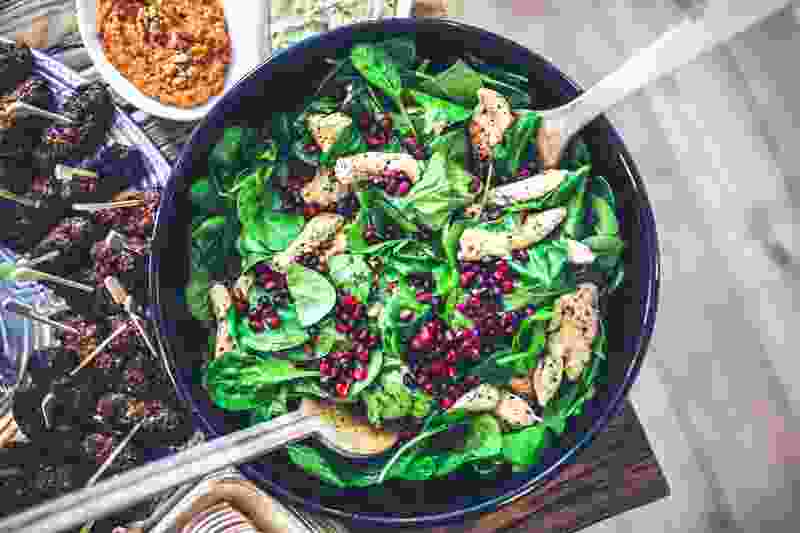 Is Spinach a Fruit or Vegetable?

Strictly speaking, a fruit is a seed-bearing part that develops from the ovary of a flowering plant. Vegetables normally come from of all other parts of the plant; most often these are the leaves, stems and roots. Since spinach are the leaves of the plant, it is categorized as a vegetable.

In the culinary world, spinach is also considered a vegetable and is prepared and served that way. 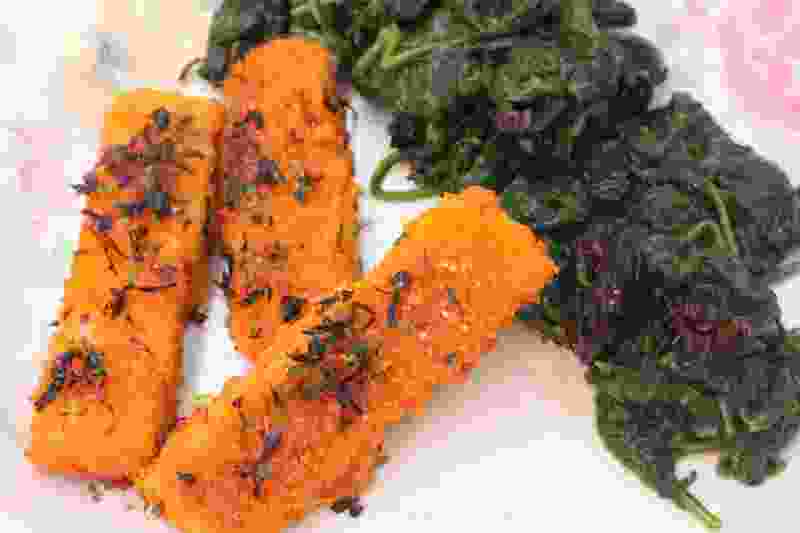 What Are the Types of Spinach?

There are 3 main types of spinach: Savoy, semi-Savoy and flat leaf.

More hybrid varieties are continually being developed. For instance, some spinach plants are being made to grow well in hotter climates, while most regular spinach grown best in cool weather.

Savoy spinach has very crinkly leaves which are more difficult to clean. Because of this cleaning aspect, this variety is not normally used in commercial applications.

However, these same crinkles and color are what makes them a main stay at your local farmers' market and specialty grocers. Savoy spinach is the perfect addition to a refreshing crisp salad.

A commonly found example of a Savoy spinach plant is either the Bloomsdale, or the Regiment.

Sometimes semi-savoy spinach is hard to tell from savoy spinach because this variety usually has lightly crinkled leaves. Comparing them side by side, the difference is pronounced, but if you just see one of these by itself, it can be confusing.

Since this variety is a little easier to grow, home gardeners most often plant semi-savoy. It is also a bit easier to wash since the crinkles are not as pronounced in the leaves, making less nooks and crannies for the dirt to cling.

Flat-leafed spinach leaves are smooth, not crinkly at all. Because this variety is easier to clean and grows faster than the savoy types, they are normally grown in the commercial segments of grocery stores and food processing plants.

Home gardeners will also grow flat-leafed spinach if they like to either freeze or can a lot of spinach leaves for use later.

Examples of flat-leafed spinach is Space Spinach. Another one is Red Carnival Spinach; this one is more colorful with its red veins running down the dark green leaves. 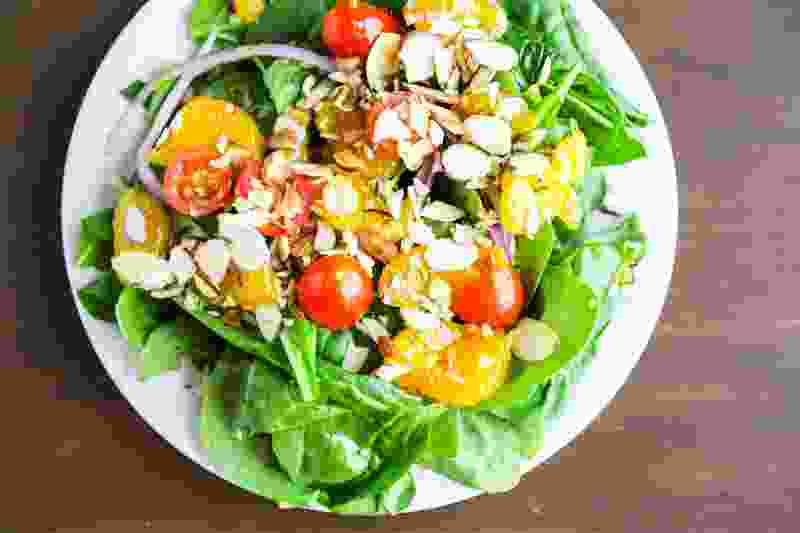 Spinach grows bright green leaves in a little bush like leaf lettuce. When harvested either from your garden or commercially, as soon as the leaves are big enough, they can be cut off the plant with their small stems. If you only remove some of the outer leaves and leave the core leaves intact, the plant will continue to grow and produce more spinach for a longer period of time.

As with many vegetables, spinach leaves are more tender with a sweeter flavor in either raw or cooked entrees when they are young.

When eaten raw, spinach leaves are somewhat sweet but don't have a very strong flavor in general. Once they are cooked, the leaves are less sweet, and the flavor become stronger but still not bitter. 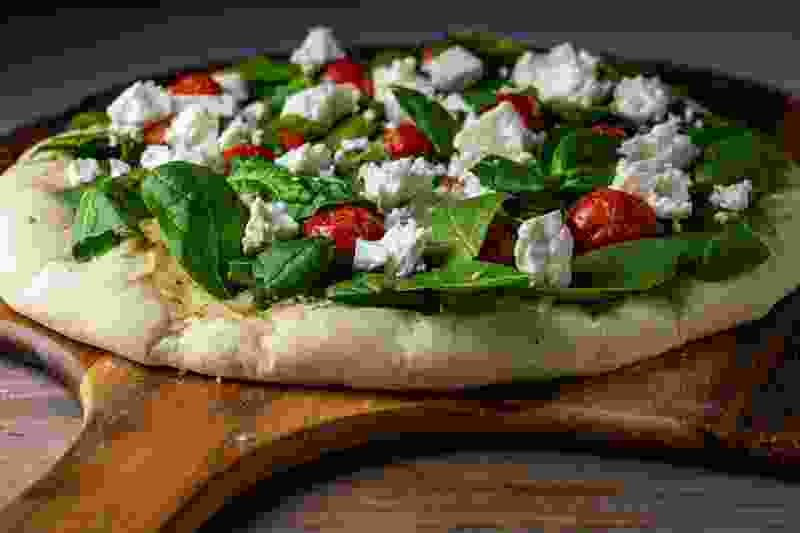 What are Good Substitutes for Spinach?

For a fresh green spinach salad, you can use dark green lettuce, beet or turnip greens and even kale as a substitute. 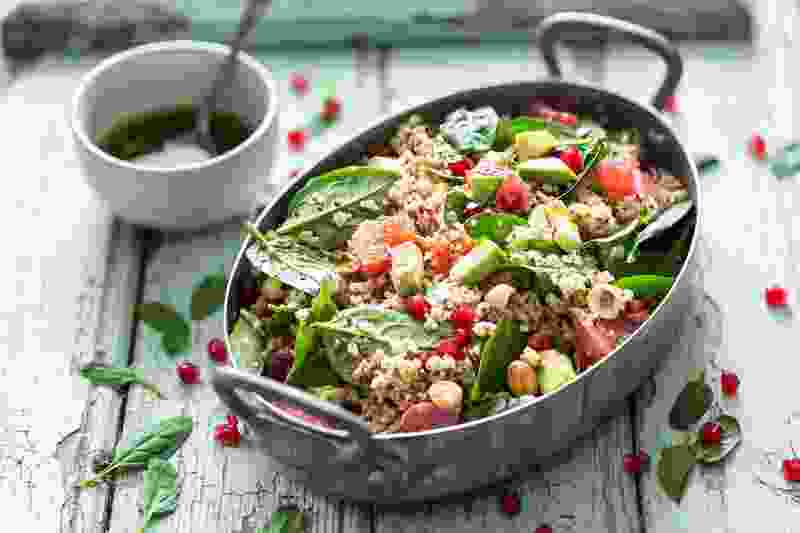 How to Cut Spinach

To prepare the spinach for cutting, begin by first removing the stems since they can be stringy to chew. For young spinach leaves you might not need to remove them, but most people do just in case.

The next step is to thoroughly wash the spinach leaves. It is much easier to clean flat-leafed varieties because the leaves are smooth. Washing the crinkly Savoy and semi-Savoy spinach leaves can be quite a challenge! I usually fill a large bowl with cold water and swish these leaves around with my hands for a minute or 2. Empty the bowl and refill; it normally takes repeating the process 2 or 3 times before all the remaining dirt is dislodged into the water.

You can serve spinach as whole leaves, like in a tossed salad. Some recipes call for chopped up leaves in various sizes depending on the salad or entrée. Others call for strips of spinach which are made by rolling up several leaves together. Then cut 1/4 to 1/2" slices across the "log" of spinach. 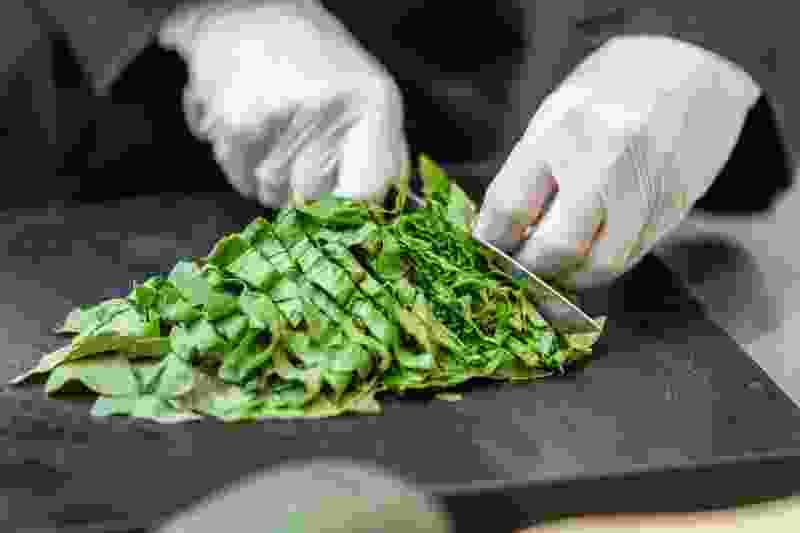 How to Make Spinach Juice

To begin, remove the stems and thoroughly wash the spinach to remove any remaining dirt, especially with the crinkly leaves. The leaves are then put into your electric juicer and run. Instead of just a glass of spinach juice, it is usually combined with other fruits and veggies to make juices and smoothies with a deeper flavor profile. 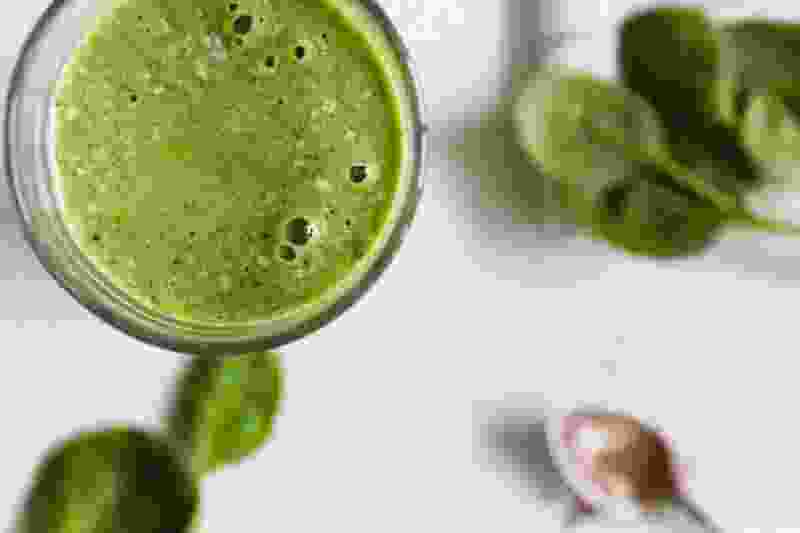 How to Store Spinach

Do not wash the spinach before storing it in the refrigerator as excess moisture can cause it to degrade quicker. It’s a good practice to inspect the leaves and pull out any bad ones you see. This will also help maintain good quality while storing.

Place the spinach leaves in a loosely closed plastic bag in the refrigerator. It will keep fresh for 3 or 4 days.

How to Freeze Spinach

You can freeze spinach, but afterwards it needs to be used in a cooked entrée or chopped up. It will not have the appearance and structure to use whole in a fresh salad.

To freeze, first destem the spinach, and wash off well in cool water. Depending on the recipe they will eventually be used in, you may even cut the leaves or tear them into smaller pieces, particularly if they are large leaves.

Most people blanch spinach leaves before freezing. However, if you will be using them within a month, you can skip this step but there is a chance the leaves will turn brown and loose texture.

To blanch spinach leaves, put them in a pot of boiling water for just 2 minutes then immediately submerge them in an ice bath to stop the cooking. Blanched spinach will maintain it's fresh quality for 12 to 14 months.

A time-saving aspect of blanching and freezing spinach leaves is you don't need to thaw them before cooking. You can just toss them into the pan with the rest of the soup or entree ingredients and it will blend in just fine.

If you plan to use chopped spinach leaves uncooked, put them into the refrigerator overnight and they will be ready when you are.

In addition to freezing, you can also both can and dehydrate spinach leaves to preserve them for longer term use, but these methods are used less often. 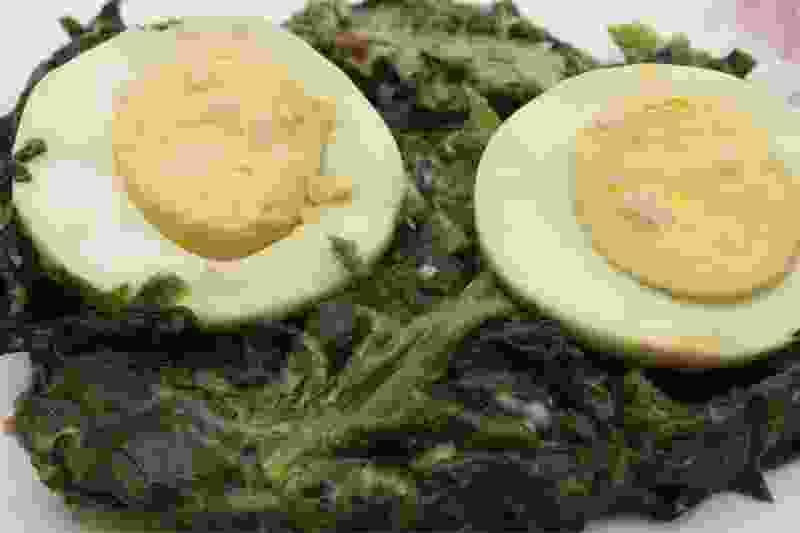 
How to Store Pound of Spinach

General How to Store Spinach Info

Spinach has a water content of 80 to 90%, making it easy to wilt by accident.

Do not wash spinach before storing, even if it's dried, a slight amount of water on the leaves will cause them to rot. Store with grit and all in a perforated plastic bag in the humid environment of the vegetable bin in the refrigerator; spinach will stay in good condition for 4 to 5 days.

Frozen spinach is handy for recipes where it is used as one of several ingredients. Clean and stem the leaves, blanch for 2 minutes in boiling water. Cool and pack in freezer containers.

There are many varieties of spinach, but they are generally grouped into leaf type: curly and flat. Savoy and semi-Savoy spinach has curly, crinkly leaves. Flat or smooth-leaf spinach has tender leaves.