How much Sliced or Grated Zucchini is in a Pound?

To answer How much grated zucchini is in a cup we went to the store to check out the vegetable section. After surveying the produce we discovered that 3 medium zucchini equaled a pound. We decided to select 1 medium sized zucchini about 8 inches long, 2 inches in diameter and weighing about 5 ounces for our how many zucchini in a cup testing samples.

When sliced, 1 medium zucchini yielded about 1 to 1.25 cups and if grated, you end up with about 2/3 cup of tamped down zucchini. If you need 1 cup of cooked sliced zucchini, due to shrinkage while heated it will take about 3 medium zucchini, sliced, to hit the mark.

Did you know that biggest is NOT best in the zucchini world? The most flavorful zucchinis are small to medium-sized with a darker skin of richer nutrients. On August 28, 2014 in Niagara Falls, Ontario, Canada the Guinness World Records verified that Giovanni Batista Scozzafava had grown the longest zucchini which measured 8 feet 3.3 inches (2.25 meters). As for the heaviest zucchini, on January 1990 Bernard Lavery of Plymouth Devon, UK is credited with growing a whopping big one at 64.5 pounds (29.25 kg).

Next time your recipe calls for a cup of sliced zucchini you'll feel confident knowing what you need. You can also use our conversion tool below for any custom how many zucchini in a... measurements you need. 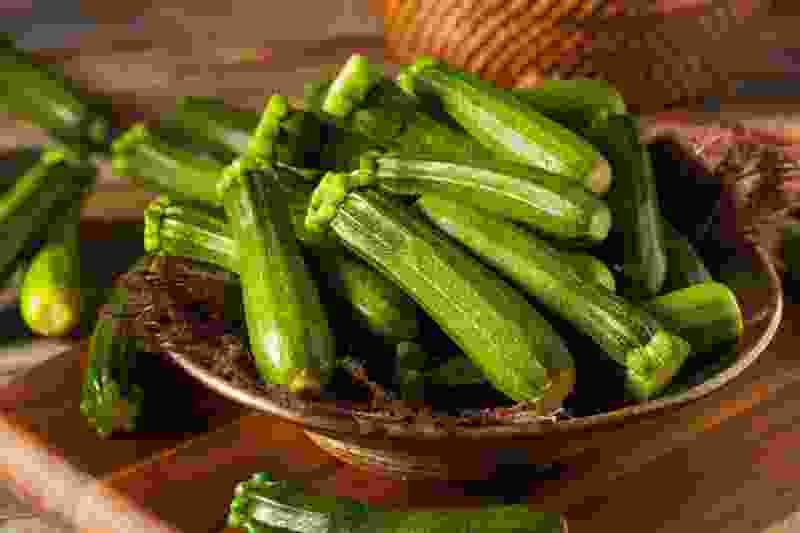 Zucchini was cultivated into its current form in Italy. It grows on a vine and is technically a berry. It is harvested young, as it hardens when it matures. It can grow up to three feet long, but most are harvested when they are 6-12 inches long. The smaller they are, the more tender they are.

Most are green, though there are yellow varieties. It is related to other squashes, cucumbers, and melons.

They contain fiber, vitamin C and several B vitamins, and potassium. The skin, flesh, seeds, and flowers are edible. 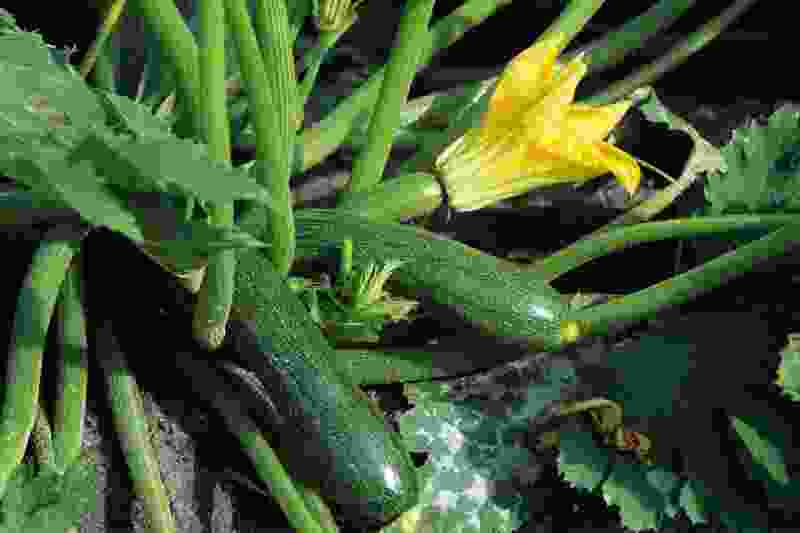 Is Zucchini a Fruit or Vegetable?

Zucchini is technically a fruit, but it is used and thought of as a vegetable, and is used primarily in savory dishes.

What Are the Types of Zucchini?

There are many varieties of zucchini. Most are light to dark green, with or without speckles or stripes, and are cylindrical like cucumbers. They can also be a golden yellow. They all have very similar flavors.

The green varieties have more lutein and zeaxanthin, which some believe are important for eye health, while yellow varieties have significantly more vitamin A.

Most zucchini are firm, cylindrical, 8 to 12 inches in length, 2 to 3 inches across with a hard wide stem at one end. The skin is dry and rough, and is varying shades of green, green and white, or yellow. The flesh is pale white with rows of soft, edible seeds in the middle.

They have a mild flavor with a little sweetness that is enhanced when they are roasted. They are crunchy when raw and soften when cooked. 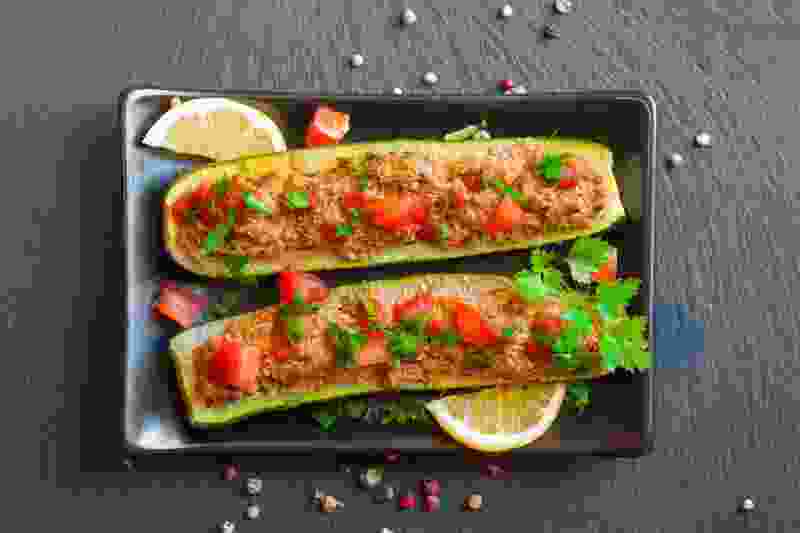 What Is Zucchini Good For and Used In?

Zucchini can be served raw as a crudite with dip, though it is more commonly cooked as a vegetable for side dishes and used as an ingredient in main dishes.

It can be spiralized or sliced into zucchini noodles, or "zoodles." It can be shredded and used in breads and cookies. 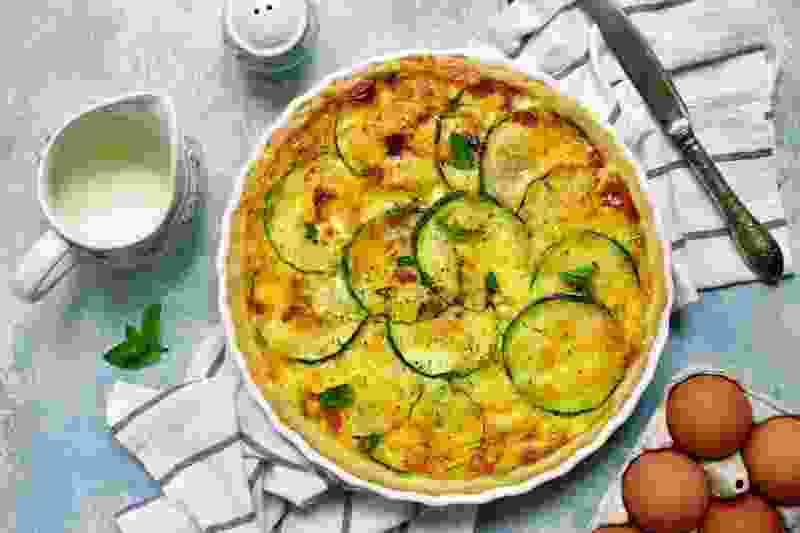 What are Good Substitutes for Zucchini?

Cucumbers can be substituted for raw zucchini. In cooked dishes, you can substitute other summer squashes, cucumber, or eggplant.

Can I Feed Zucchini to My Dog, Cat, or Other Pet?

Dogs and cats can eat raw or cooked zucchini, but don’t feed it to them if it’s been cooked with garlic or onions as those can be toxic. Be careful not to feed too much, any food that your pet is not used to can cause vomiting and diarrhea.

Reptiles can have zucchini as an occasional treat, but it is very low in calcium and too much can cause bone disease and lead to fractures.

Does Zucchini Give You Gas?

Raw zucchini has lots of methylcellulose (fiber) which can cause gas. Cooking breaks down the fiber and makes gas less of a problem.

How to Store Zucchini

Unwashed zucchini should be stored in an unsealed bag (or no bag) in the vegetable drawer in the refrigerator. Washing it removes a natural protective layer, and the moisture will make it deteriorate faster. It will last about a week. 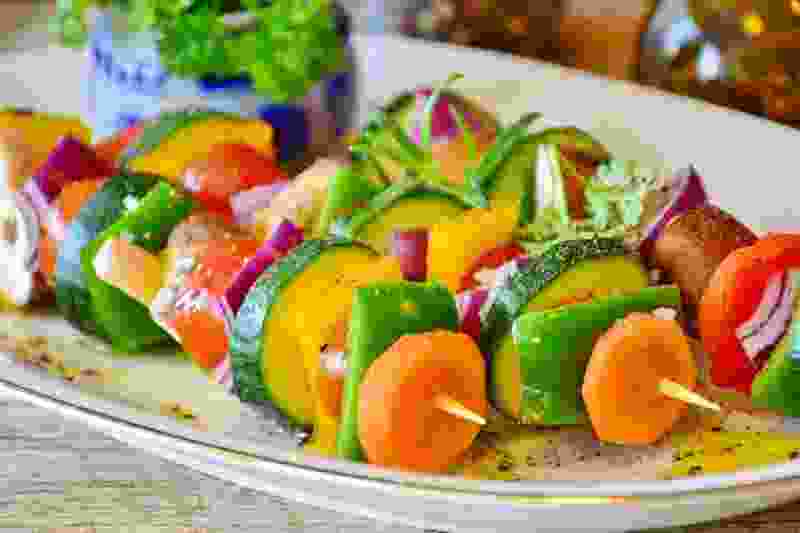 How Long Does Fresh Zucchini Last at Room temperature?

Zucchini will only last a couple days at room temperature. It is much better to refrigerate it in an unsealed bag (or no bag at all) in your vegetable drawer.

How to Store Cut Fresh Zucchini

Cut cooked or fresh zucchini should be stored in an airtight container in the refrigerator. It will last a few days. It is best to cut it as close to the time you will use it as possible.

How to Store Zucchini in the Refrigerator

Raw zucchini should be stored in a perforated bag, or no bag, in the vegetable drawer in the refrigerator.

Do not wash it first. This removes the natural protective layer and the moisture can lead to faster deterioration. 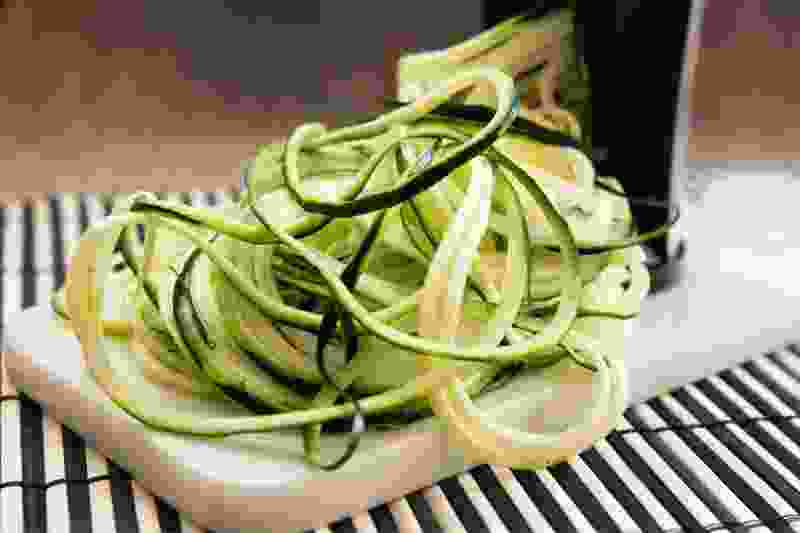 Can You Freeze Zucchini and if so How?

Fresh zucchini can be frozen, but it must be blanched first to retain the color.

To blanch zucchini, fill a large pot with water, add 1 teaspoon of salt per quart, and bring it to a boil. While it’s heating, fill a large bowl with ice water, and line a sheet pan with several layers of paper towels.

Slice the zucchini into medallions by placing it on a cutting board and slicing across it. Discard the stem and a small piece of the other end.

Then place the slices in a single layer on a sheet pan lined with parchment paper, and freeze them. Once they are frozen, you can transfer them to a sealed plastic bag or freezer container. Use within three months.

When defrosted, previously frozen zucchini will be much softer than fresh zucchini, and may release a lot of water when it is cooked.

How to Cut Zucchini

Zucchini can be cut many different ways. To make medallions, wash it first, then lay it on a cutting board with the stem at one end. Cut off and discard the stem and tail ends, then cut across the zucchini in your desired width.

Zucchini can also be cut into planks. Lay the washed zucchini on a cutting board, and slice down through the zucchini from end to end in 1/4 inch increments.

A mandolin can be used to make very thin slices or planks. Use the holder that comes with the mandolin to hold the zucchini and pass it across the mandolin blade either lengthwise or crosswise depending on the shape you want. Always use the holder, otherwise it is very easy to slice your fingers on a mandolin.

Zucchini can also be spiralized into noodles, called "zoodles." Follow the directions that came with your spiralizer. 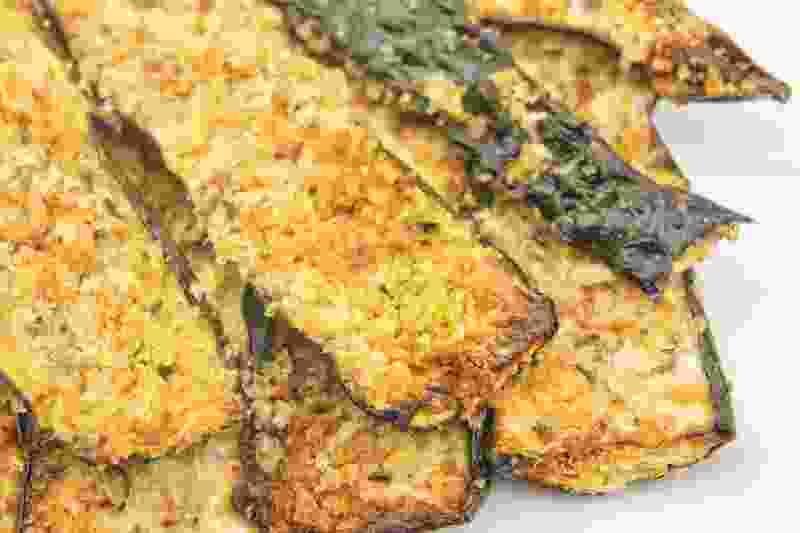 How to Clean Zucchini

Zucchini should be rinsed under fresh cold water. Do not wash it until you are ready to use it. Washing removes the natural protective layer, and the moisture will make the zucchini deteriorate in the refrigerator. 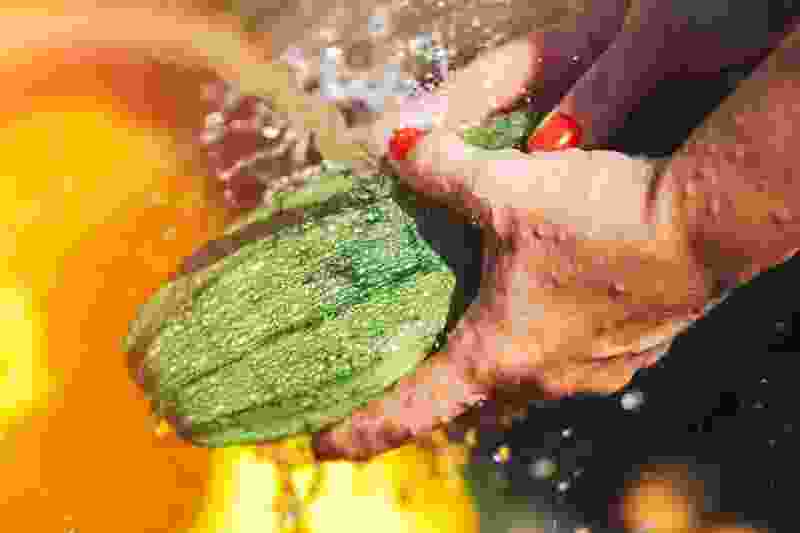 Can I Eat the Skin of Zucchini or Should I Peel It First?

The skin is completely edible and does not need to be removed. A lot of the beneficial nutrients are in the skin.

How to Slice Zucchini

To slice zucchini, lay it on a cutting board. Use a chef's knife to slice off and remove the stem and tail ends. Cut across the zucchini into the desired size. 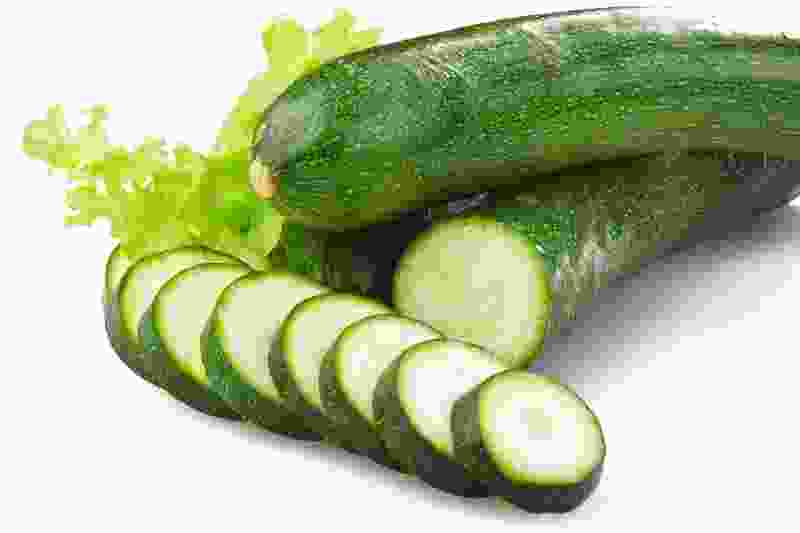 How to Chop or Cube Zucchini

Lay the zucchini on a cutting board and slice off the stem and tail ends with a chef’s knife. Cut the zucchini lengthwise into halves. Cut each half lengthwise again, so that you have quarters. Then slice across the quarters into the desired size dice.

Then lay the zucchini on its side and slice across it to get the desired size cubes. The stem will hold the quarters together so you can cut all four pieces at the same time.

How to Dice or Mince Zucchini

Lay the zucchini on a cutting board and use a chef’s knife to cut off the stem and tail ends. Stand the zucchini on end and slice down from top to bottom to get planks. Lay half the planks in a stack on the board, and cut from end to end in the desired width, then cut crosswise into the desired size cubes. Repeat with the other half of the planks.

How to Zest Zucchini

How to Mash or Puree Zucchini

Zucchini can be mashed by cooking it until it is very soft, then mashing it with a potato masher or a fork. It can also be pureed in a food processor fitted with a steel blade. 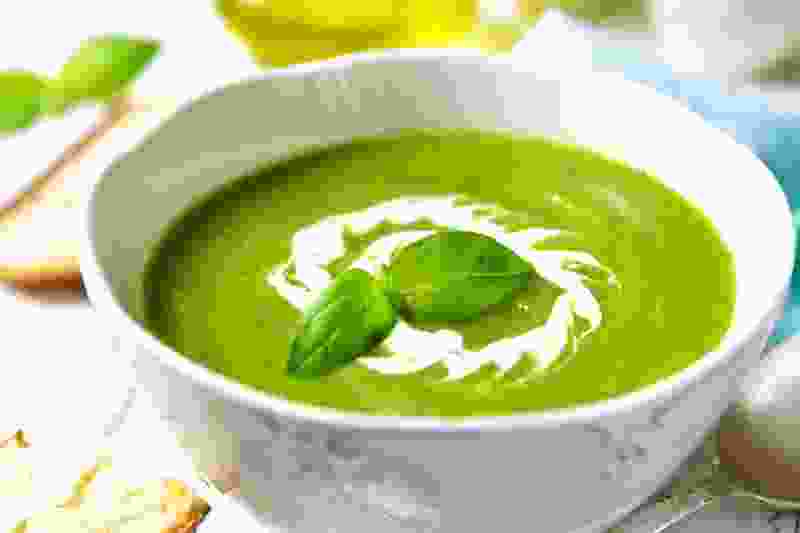 How to Grate or Shred Zucchini

Zucchini can be grated on the large holes of a box grater or using the shredding disk of a food processor.

How to Make Zucchini Juice

Zucchini can be juiced in an electric juicer.

Wash off the zucchini with cool running water, then cut it into pieces that will fit into the shoot of the juicer. Put the pieces into the juicer and turn it on - enjoy your refreshing beverage! 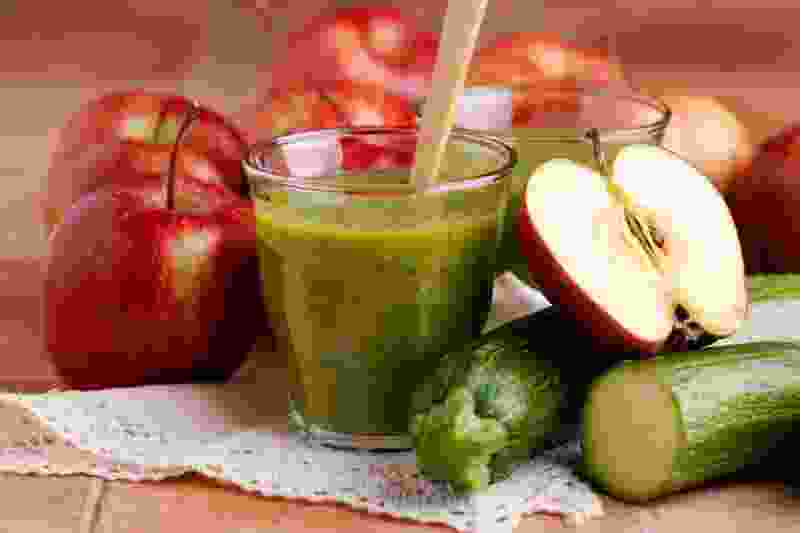 Does Zucchini Have Seeds and Can I Eat Them? How do I Remove the Seeds?

Zucchini has small soft seeds in the middle that are usually edible. In larger zucchini, the seeds may be tough and bitter and most people remove those.

To remove the seeds, lay a zucchini on a cutting board and use a chef’s knife to cut it into quarters. Use the knife to slice between the flesh and the seeds and discard the seeds.

Can I Eat Zucchini Greens?

Yes, young zucchini leaves can be boiled or sauteed. Older, larger leaves tend to be tough and bitter.


How to Store Zucchini